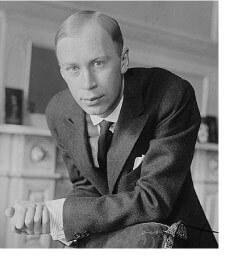 Sergei Prokofiev was born in Russia on April 27*, 1891. He began studying the piano with his mother at the age of three. By the age of five Sergei was displaying unusual musical abilities. His first composition, written down by his mother, was called Indian Gallop. By the age of nine he had written his first opera, The Giant.

At the age of thirteen Sergei entered the St. Petersburg Conservatory having already produced a whole portfolio of compositions. While at the conservatory he studied with Russian composer Nikolai Rimsky-Korsakov. Later in his life, Prokofiev was said to have regretted not having taken full advantage of this opportunity.

The music that Prokofiev composed was new and different. He brought to the concert hall strange new harmonies, dynamic rhythms and lots of humor.

When the Russian Revolution broke out, Prokofiev traveled to America. He hoped he would be able to compose in peace. American audiences, however, were not ready for his new sounds, so he moved to Paris. In Paris, Prokofiev found greater success where his operas and ballets were well liked.

Prokofiev returned to Russia in 1932 spending the last 19 years of his life in his home country. During this time, he produced some of his finest works including Peter and the Wolf for chamber orchestra and narrator, and the score for his ballet Romeo and Juliet which contained some of his most inspired music.

Sergei Prokofiev died on March 5, 1953, as one of the most admired composers of the twentieth century.

Watch a performance of Prokofiev's Peter And The Wolf with the Kaleidoscope Chamber Orchestra and narrator.