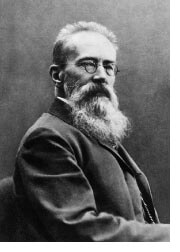 Nikolai Rimsky-Korsakov was born in 1844 in Tikhvin, a village east of St. Petersburg, Russia. Though Nikolai showed a talent for music at an early age, he pursued an education at the School for Mathematical and Navigational Sciences in St. Petersburg and later joined the Imperial Russian Navy. It was not until he met Mily Balakirev in 1861 that he decided to concentrate on developing his musical skills. When Rimsky-Korsakov was not at sea, Balakirev encouraged and taught him how to compose music. It also was through Balakirev that Rimsky-Korsakov met four other composers who later became known as the The Five.

In 1871, Rimsky-Korsakov took a post as the professor of composition and orchestration at the St. Petersburg Conservatory. During his first few years as a teacher at the Conservatory he also concentrated on developing his own skills as a composer.

In 1872, Rimsky-Korsakov married Nadezhda Nikolayevna Purgold (1848-1919), a pianist and composer. Modest Mussorgsky, another famous composer, was his best man at their wedding.

Rimsky-Korsakov died in 1908, having written some of our most celebrated music. His works include Flight of the Bumblebee from Tsar Saltan and the symphonic suite Scheherazade. He is also recognized for his talents as an orchestrator. It is his version of Mussorgsky's Pictures at an Exhibition that has taken its place in the standard orchestra repertory.

Watch a performance of Rimsky-Korsakov's Flight of the Bumblebee, played by the Canadian Brass.


Flight of the Bumblebee Game

The Flight of the Bumblebee Game is a spin on musical chairs. Half of the participating children form a circle to make a bee hive. The other half are bees. When the music starts the bumblebees run in and out of the hive. When the music stops the hive members grasp hands to trap bumblebees inside the hive. Trapped bumblebees become members of the hive and the process continues until there is only one bee left. This bumblebee is the winner of the game.

Ask students review questions about Nikolai Rimsky-Korsakov and his music during breaks in game play.

Materials: Recording of Nikolai Rimsky-Korsakov's Flight of the Bumblebee