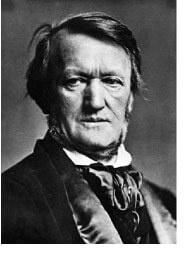 Richard Wagner was born in Leipzig, Germany, on May 22, 1813. He was the ninth son of Carl Friedrich Wagner and Johanna Rosine. Richard's father died of typhus six months after his birth. His mother then married painter, actor, and poet, Ludwig Geyer, and the family moved to Dresden.

Richard took an interest in the plays in which his step-father performed, and Richard sometimes even participated in the plays alongside him. In late 1820, Richard received some piano instruction from a Latin teacher. As a teen, Richard's teacher said that he would "torture the piano in a most abominable fashion." Despite what his teacher thought, Richard enjoyed playing the piano and began to compose music as a teenager.

In 1831, he attended Leipzig University. He was impacted greatly by famous musicians, such as Beethoven, Mozart, and Wilhelmine Schröder-Devrient.

In 1831, he attended Leipzig University. He was impacted greatly by famous musicians, such as Beethoven, Mozart, and Wilhelmine Schröder-Devrient.

In 1833 Wagner became a choir master in Würzburg, Germany. Within a year of obtaining this position, Wagner composed his first opera, Die Feen (The Fairies). This opera was not performed until after his death.

Between 1857-1864, he wrote the opera Tristan and Isolde, a tragic love story. Many musicians consider Tristan and Isolde to be the beginning of modern classical music. Because of Wagner's strong political views and his poor money management, Wagner had to move often, moving to Russia, France, Switzerland, and then back to Germany. Even though his life was turbulent, he produced some of his most famous works during this time.

Wilhelm Richard Wagner died on February 13, 1883, at the age of 69 while visiting Venice, Italy. His was buried in Bayreuth, Germany, where there is still an annual musical festival that performs his operas. Richard Wagner is best-known for Tristan and Isolde, The Ride of the Valkyries and Bridal Chorus, also commonly called Here Comes the Bride.

Watch a performance of Wagner's Ride of the Valkyries, performed by the UBC Symphony Orchestra.