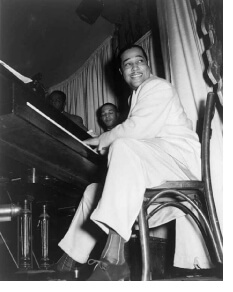 Duke Ellington was born Edward Kennedy Ellington in Washington, D.C. on April 29, 1899. His father, James Ellington, made blueprints for the United States Navy. James and his mother Daisy were both pianists.

At the age of seven Duke's parents enrolled him in piano lessons. His parents encouraged Duke to practice every day, even though Duke would have preferred to play baseball. Daisy also encouraged Duke to have good manners and elegance. A friend nicknamed him "Duke" because his elegant manner and dapper dress gave him the character of a young aristocrat.

In the summer of 1914, Duke wrote his first composition, "Soda Fountain Rag," while working as a soda jerk. "Soda Fountain Rag" was "written" by ear, however, as Duke had not yet learned to read and write music.

Jazz musicians were in demand in New York, and by 1923 Ellington had moved there and formed his own band, the Washingtonians. Musicians and critics were noticing that Ellington's music was special, and four years later Ellington was offered an engagement at Harlem's hottest jazz spot - The Cotton Club.

In 1969, President Nixon threw Duke Ellington a party at The White House to celebrate his 70th birthday. To honor his lifetime of achievement Nixon gave him the Presidential Medal of Freedom.

Duke Ellington died on May 24, 1974, having established himself as one of the greatest jazz artists and composer of all-time. He is best remembered for his Take the A Train and It Don't Mean a Thing (If It Ain't Got That Swing).

Watch a performance of the Duke Ellington Orchestra performing It Don't Mean a Thing (1943). Composed by Duke Ellington in 1931, with lyrics by Irving Mills.