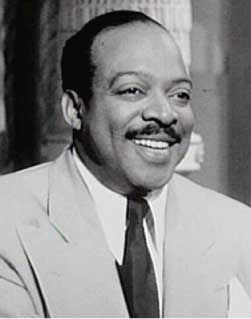 William James Basie was born on August 21, 1904 in Red Bank, New Jersey to Harvey Lee Basie and Lillian Ann Childs. His father was a coachman and caretaker for a wealthy judge. When cars replaced horses his father worked for several families as a handyman and groundskeeper. His mother took in laundry and baked cakes to sell.

William's family provided piano lessons for him at 25 cents a lesson, though he was not much of a student. He preferred instead to dream of a life of travel, fascinated by the carnivals which came to town.

As a teenager William would hang out at the Palace theater in Red Bank. The occasional offer from the management to do chores afforded him the opportunity to see some of the shows. One day, when the regular theater pianist did not arrive by show time he took his place. He quickly learned to improvise music that enhanced the scenes in the silent movies that played on screen.

Around 1924, Basie moved to Harlem, a center of East Coast jazz. He was soon meeting many of the jazz musicians who were making the scene. In 1925 he began touring cities like Kansas City, St. Louis, Chicago and New Orleans. While on tour he met many more great jazz musicians including jazz trumpeter/singer Louis Armstrong.

By the end of 1936, Basie had formed his own band, and moved to Kansas City. While there they honed their repertoire during their long engagement at Chicago's Grand Terrace Ballroom.The band quickly became known for the quality of their rhythm section.

In 1954 Count Basie Orchestra and his band made its first European tour. It was also around this time that Basie's band had come to be recognized as one of the pre-eminent backing big bands for some of the great jazz vocalists of the time.

Count Basie died on April 26, 1984, widely regarded as one of the most important Big Band leaders of all time. He introduced several generations of listeners to the Big Band sound and left an influential collection of recordings.

Watch a performance of the Count Basie Orchestra performing April in Paris at the Jerry Lewis MDA Telethon in 1977.