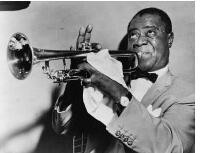 Louis Armstrong was born in New Orleans, the "Birthplace of Jazz." Soon after Louis was born Louis' father abandoned his mother and Louis and his little sister Beatrice were sent to live with their grandmother. At the age of five, Louis and his sister returned to live with their mother. Later Louis was enrolled in the Fisk School for Boys and worked to help his mother by delivering newspapers and hauling coal.

At the age of eleven Louis dropped out of school and joined a quartet of boys that sang on the street to earn money to help his family. It was also around this time that Louis started getting in trouble. In 1913, the police took him to a home for troubled boys. It was there that Louis talked the band director into letting him join the band. Louis learned to play the cornet quickly.

At thirteen, Louis was released from the boys' home and spent the next few years supporting his family by selling newspapers and unloading bananas from boats. In his free time Louis would listen to local bands and perform when he had the opportunity.

Louis' talent and enthusiasm was recognized and admired by Joe "King" Oliver, a famous cornet player. Oliver decided to mentor young Louis. In return, Louis did small jobs and ran errands for "King" Oliver. When "King" Oliver left for Chicago, Louis began performing on steamboats which toured up and down the Mississippi River. For the next three summers, Louis toured on the steamboats and improved his playing skills as well as learned how to read music.

New York City was the place where many jazz artists built their careers. So in 1924 Louis moved to New York at the request of famous New York bandleader Fletcher Henderson. It was also then that Louis switched to the trumpet to blend his sound better with the other members of the trumpet section. His energetic and creative playing style captured the attention of the New York jazz scene. No one else could play like Louis!

After one year in New York, Louis returned to Chicago. It was there that Louis made the first recording with his own band "The Hot Five". During the recording session, Louis dropped his lyric sheet on the floor. Rather then stopping, the record producer encouraged Louis to keep on singing without the lyrics. Louis sang the chorus in nonsense syllables. The unpredictable rhythms of Louis' voice have inspired other musicians ever since!

Louis Armstrong became one of the most famous jazz musicians of the 20th century. He was a singer since his childhood, a master of the trumpet, and even a dancer in musicals. He devoted his life to bringing joy to people through his music. Despite the challenges in the early days of his life, Armstrong rarely viewed his youth as the worst of times but instead drew inspiration from it, "Every time I close my eyes blowing that trumpet of mine - I look right in the heart of good old New Orleans...It has given me something to live for."