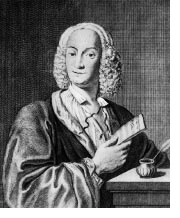 Antonio Vivaldi was born on March 4, 1678 in Venice, Italy. Antonio's father was a barber and a professional violinist. He taught Antonio to play the violin, and he practiced very hard. Soon Antonio and his father were performing together and touring Venice.

When Antonio turned 15, he decided to become a priest and began his training. At the age of 25, he was ordained and was referred to as Il Prete Rosso, which means "The Red Priest." He got that nickname because of his red hair.

In 1703 Vivaldi was invited to teach violin lessons at Ospedale della Pietà, an orphanage that taught boys a trade and gave girls a musical education. Vivaldi brought recognition to the Pietà through the concertos, cantatas, and sacred vocal music he wrote for the girls to perform. Their concerts were spectacular!

Vivaldi's most popular composition is a set of concertos for the violin. The Four Seasons, written around 1716, is inspired by a poem for each season of the year. The most popular concerto is "Spring."

During his lifetime, Vivaldi was popular in many countries throughout Europe. It's easy to understand why. His music is joyful, almost playful, and it revealed his joy of composing. However, after his death Vivaldi's popularity declined. Even his most famous work, The Four Seasons, was relatively unknown during the Classical and Romantic periods.

Today Vivaldi is one of the most celebrated composers of the Baroque Era.

Watch a Video About Antonio Vivaldi

Watch a performance of Vivaldi's "Spring" from the The Four Seasons.

"Spring" from the Four Seasons | Easy Piano Lesson for Kids