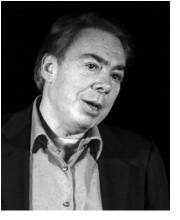 Andrew Lloyd Webber was born in London, England in 1948. His father was the director of the London College of Music and his mother was a piano teacher.

England is the home of Big Ben, fish and chips, and the Beatles.

At the age of three Andrew started playing the piano and violin. By the age of six he had also taken an interest in the French horn and composing his own music. By the age of nine he was staging his own puppet theater productions with the help of his brother Julian and his Aunt Viola.

At 13 Andrew had composed his first stage musical, which he called Cinderella Up the Beanstalk and Most Everywhere Else.

Soon after college, Andrew Lloyd Webber staged his first professional production with lyricist Tim Rice. It was Joseph and the Amazing Technicolor Dreamcoat based on the Bible story of "Joseph and his Coat of Many Colors." It started as a 20-minute "pop-cantata" and grew with each performance to become a two-hour show.

In the following year, Lloyd Webber collaborated with Rice again to write the rock opera, Jesus Christ Superstar. Initially, they were unable to get backing for a stage production, so they released the musical score as an album. The success of the album led to an onstage debut in 1971. The original production ran for eight years and became the longest-running production in British musical theater history.

Lloyd Webber followed with Cats in 1981, which is set to T.S. Eliot’s collection of whimsical poems, “Old Possum's Book of Practical Cats.” Cats premiered in the London’s West End in 1981 and on Broadway in 1982. It closed after 18 years and more than 7,000 performances, making it the longest-running Broadway show in history.

Lloyd Webber wasn’t finished yet. Five years later he topped Cats with his blockbuster musical, The Phantom of the Opera, which is based on a French novel about a beautiful soprano who becomes the obsession of a mysterious, masked musical genius living beneath the Paris Opera house. The musical opened in London's West End in 1986 and on Broadway in 1988 and surpassed the success of Cats to a set a new record for the longest-running Broadway show in history.

Watch a Video About Antonio Vivaldi

Watch a performance of Webber's Memory from his musical Cats.