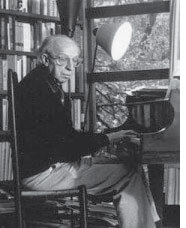 
Aaron Copland was born in Brooklyn, New York, on November 14, 1900 to Jewish parents who immigrated from Russia. His first experience with music came from his older sister who taught him how to play the piano.

By age 17, Aaron decided that he wanted to be a composer, so he began taking composition lessons from a respected private music instructor in Manhattan. During this time, Aaron attended many music performances at the New York Symphony and Brooklyn Academy of Music where he listened to the music of contemporary and classical composers. Following his passion for European music, Aaron left New York for Paris.

While in Paris Copland studied with Nadia Boulanger, a French music professor, who taught many of the most important composers of the 20th century. Copland began to write his first full-fledged pieces. He soon sold his first musical composition, and was asked to write another piece of music for the Boston Symphony Orchestra. Symphony for Organ and Orchestra (1925), marked the beginning of Copland's life as a professional music composer. Compositions that followed included elements of jazz, because Copland believed jazz would inspire a nationalistic sound that was distinctly American.

In the late 1920's, Copland shifted his interest in jazz to popular folk music. It was with this new interest that Copland would forge a new and dynamic symphonic style. In 1935, Copland premired El Salon Mexico, a work which began his most productive and popular years as a composer.

In search of a wider audience for his music, Copland began composing music for the ballet and for the movies. His most popular film scores include Our Town (1940) and The Heiress (1949), for which he won an Academy Award for Best Score. For the ballet he composed Rodeo (1942) and Appalachian Spring (1944), for which he received the Pulitzer Prize. One of his most unique and successful pieces from this time period was Lincoln Portrait (1942). The piece, written for orchestra and narrator, presented quotes from Lincoln's writing over a musical score.

Aaron Copland died in North Tarrytown, New York, on December 2, 1990. His distinctive and masterful compositions shaped our American musical style, and made him one of the most important composers of the twentieth-century.