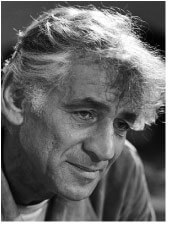 Leonard Bernstein was born in Lawrence, Massachusetts in 1918. His father, Sam Bernstein, did not support young Leonard's interest in music at first. Despite this, his father took him to many orchestra concerts. At one of these concerts he heard a piano performance that captivated him. It was then that he began to learn to play the piano.

In 1934, Bernstein enrolled at Harvard University where he studied music with Walter Piston. After finishing his music studies at Harvard, he attended the Curtis Institute of Music in Philadelphia where he studied piano, conducting and composition. While at the Curtis Institute, Bernstein was awarded the only "A" grade in conducting that his teacher Fritz Reiner ever gave.

In 1943, when Bernstein was still very young, he was appointed to his first permanent conducting post as assistant conductor of the New York Philharmonic. On November 14, 1943 he was asked to substitute for principal conductor Bruno Walter who was not feeling well. With just a few hours notice, Bernstein accepted. The Carnegie Hall concert which was broadcast nationally on radio received critical acclaim. Soon orchestras worldwide were asking him to be a guest conductor.

From 1958-1969 Bernstein served as the principal conductor of the New York Philharmonic. During his time with the New York Philharmonic, Bernstein conducted the orchestra for the CBS television series, Young People's Concerts. Throughout Bernstein's musical career he believed teaching young students was a very important thing to do. Years later, Bernstein referred to these concerts as being "among my favorite" and his most highly prized activities of his life.

Bernstein also composed music for the symphony orchestra and musical theater. His first large-scale work for symphony orchestra, Symphony No. 1: Jeremiah (1943), received the New York Music Critics Award. West Side Story, written for the Broadway stage, was later made into an Academy Award-Winning film.

Watch a performance of Bernstein's Cool from his musical, "West Side Story."