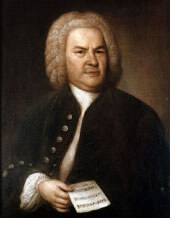 Johann Sebastian Bach was born in Eisenach, Germany in 1685. As a child, Bach's father taught him to play violin and harpsichord. One of his uncles, Johann Christoph Bach, introduced him to the art of organ playing.

In 1707, Bach married his second cousin Maria Barbara Bach. They had seven children.

In 1708 Bach became the court composer, organist, and Konzertmeister (instrument-playing leader of the orchestra) of the Weimar orchestra for the Duke of Weimar. When the Kapellmeister (conductor of an orchestra or choir) died in 1716, Bach asked about taking this job, but the duke appointed someone else. When Bach asked to be released from the Duke's service he put Bach in jail for four weeks before finally dismissing him.

In 1717 Bach accepted a new post as the Kapellmeister for Prince Leopold of Köthen. He was a very nice person to work for and very musical. However, the organ was not very good so Bach did not write organ music during this time. Instead, Bach focused on composing for the orchestra. During his six-year post in Köthe, Maria died, and Bach married Anna Magdalena Wilcke. Bach had 13 more children with Anna Magdalena and became the father of 20 children.

In 1723, Bach became the cantor, organist, and music composer for St. Thomas Lutheran Church in Leipzig, Germany. Bach remained there for the rest of his life and focused on composing choral works.

Johann Sebastian Bach died in 1750. He was considered an "old-fashioned" composer during his lifetime, and almost forgotten after his death. He is most remembered for his Brandenburg Concertos, the Well-Tempered Clavier, and the celebrated organ work Toccata and Fugue in D Minor. Today, Bach is considered such an important composer that the year of his death is a defining point in music history. It marks the end of the Baroque Era.

Watch a performance of Bach's Toccata and Fugue in D Minor for organ.