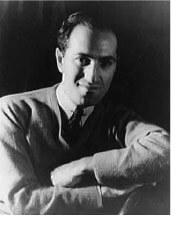 George Gershwin was born as Jacob Gershowitz on September 26, 1898, in Brooklyn, New York. George, the second of four children, was born to Russian Jewish immigrant parents Morris Gershowitz and Rosa Bruskin. His father changed the family name to Gershwin after immigrating from Russia.

George first displayed an interest in music at the age of 10 when he attended his friend's violin recital in lower East Side Manhattan. His parents purchased a piano for George's older brother Ira, but it was George who played it.

After trying various piano teachers for his first two years of study, he was introduced to Charles Hambitzer, the pianist with the Beethoven Symphony Orchestra. Hambitzer mentored George's musical development until his death in 1918. Mr. Hambitzer taught George traditional piano technique, introduced him to the classical music of European composers, and encouraged him to attend orchestral concerts to hear their music.

By the age of 15 George had begun working in Tin Pan Alley's publishing district as a "song plugger." He first worked for the Remick publishing house in New York playing piano to boost sales for the company. Later he worked for the Harms publishing house where he earned thirty-five dollars a week writing songs. It was during this time that he began to receive commissions to write songs. Then, in 1924, George teamed up with his brother Ira, a lyricist, and began what would be a legendary career. Together they produced many of Broadway's hits including "Lady be Good," "Strike Up the Band," "Fascinating Rhythm" and "I Got Rhythm." Gershwin won the Pulitzer Prize for Of Thee I Sing (1931) which was the first musical comedy to be awarded this honor. However, despite the honor it received, it was his Rhapsody in Blue which he wrote in 1924 that made him a star.

George Gershwin died on July 11, 1937 in Hollywood, California of a brain tumor. He was only 38 years old.

Watch a performance of Gershwin's Rhapsody in Blue for piano and orchestra. Leonard Bernstein conducts the New York Philharmonic (1976).


Watch George Gershwin perform "I Got Rhythm" at the opening of New York's Manhattan Theatre on August 5, 1931.