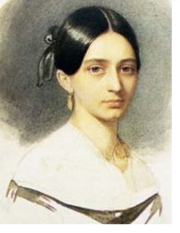 Clara Schumann was born in Leipzig, Germany on September 13, 1819. Her father Friedrich Wieck was a professional pianist and teacher, and her mother Marianne was an accomplished singer.

At the age of 4 Clara began music lessons with her mother. When her parents divorced her father continued her instruction, focusing on piano, violin, singing, music theory, harmony, composition, and counterpoint. Following her lessons she was required to practice two hours each day.

At the age of 9 Clara made her official debut at the Gewandhaus concert hall in Leipzig. It was also during this year that she met her future husband, Robert Schumann. Robert was so impressed with her piano playing that he asked to study piano with her father as well.

At the age of 11 Clara began a successful tour, including performances in Paris and Vienna.

By the age of 16 Clara had composed one of her most successful works - Piano Concerto in A Minor. It was recognized as a significant accomplishment and it served to launch her career.

On September 12, 1840, the day before Clara's 21st birthday, Robert and Clara were married. As a wedding gift, Robert Schumann gave his bride a diary. Clara used this diary to record their musical and family life together.

Clara raised her 8 children, supported Robert’s successful career as a composer, and performed regularly. Despite Robert’s success, it was Clara that provided the greater part of their family income through concerts tours and music lessons.

Clara Schumann died on May 20, 1896, at the age 76. She is remembered as one of the most important pianists and composers of the Romantic Era. Germany, the country of her birth, celebrated Clara by placing her picture on the 100 Deutsche Mark from 1989 to 2002.

Watch a performance of Clara Schumann's Piano Concerto in A Minor.