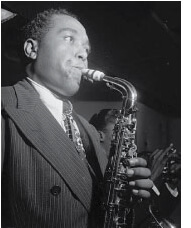 
Charlie Parker grew up listening to music. He was born in 1920 and spent his childhood in Kansas City, Missouri which was one of the hottest places for Jazz in the whole country. His father, a song and dance man, moved the family there in hopes of finding work. However, he was unable to find work near their home, so Charlie's dad eventually left to work on the railroad. He was often gone and eventually left the family altogether. After that, Charlie's mom began working at two or three jobs to provide for her family. At night when his mom was working, Charlie would go out and listen to jazz.

Charlie started to learn to play the alto saxophone when he was twelve years old. Listening to jazz musicians, he taught himself to play and at 14 he joined his first band. He was eventually able to take lessons which helped him to develop his skills even more. Charlie listened to the records of tenor saxophonist Lester Young until he was able to play each recording from memory. Charlie said that he practiced up to 14 hours a day!

Charlie was different than most high school kids. He spent his days practicing his saxophone and many of his nights visiting Kansas City's jazz clubs. Charlie loved music.

After a short time in Chicago, Charlie moved to New York and began playing in swing bands. He also began experimenting with his own style of music, gathering musicians together to play challenging and energetic new jazz style that later became known as bebop. This exciting and fast-paced jazz eventually became recognized as an important new musical style in the musical community.

Early in his career he acquired the nickname "Yardbird," which was later shortened to "Bird." The nickname inspired many titles for Charlie's Be-bop compositions including Yardbird Suite and Ornithology, which means the 'study of birds'.

Unfortunately, Charlie's long time use of drugs and alcohol which began when he was a teenager, ended his life in 1955 at the age of 34. When most musicians are enjoying their peak years as musical artists, Charlie Parker's life had ended.